Even more writing/story stuff this weekend. BUT WAIT! Before you roll your eyes and move on to wherever else you plan on surfing to, I have more visual things to show. I am also applying more changes to the demo part to make it better fit some some of the key events later on in the game. One particular task I felt like working on this weekend was a simple yet important animation I wanted add to the (currently) mysterious person that attacked the train. Here is the very short animation I made:

Pretty amazing right? It's a key visual element that provides a profound commentary on the conflict on today's society. Not really but it is something I hope supplements the scene a little better at least.

Aside from applying changes, I pondered on how Pangaia (still working on the name of the continent in Wayfarers) will look. I remember seeing a cool map making method where you roll a bunch of different types of dice onto a map and drawing it out based on where the dice landed and what numbers they landed with. Since I don't have a plethora of dice, I searched the internet to find an online map generator called Azgaar's Fantasy Map Generator. This generator is pretty in depth with things like the climate of the world, how many regions/countries there are, how the land is set, filters for religions/biomes/diplomacy, towns in every region, travel routes (when zooming in on the map), and so much more. 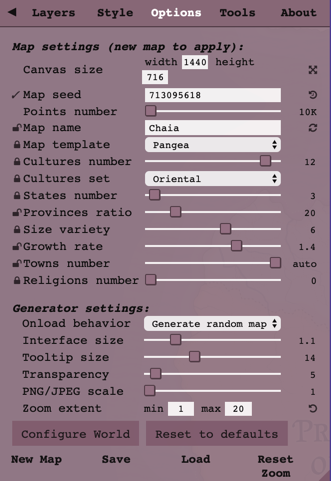 Well look at that. It even has a "Pangea" option

Right now I've only set the amount of regions and the land formation and just hit the "New Map" button to get ideas on what I should make for Wayfarers. Just like figuring out the new name for "Pangaia", I'll be messing around with these map settings until I find one where I go "That's it! This is the map for Wayfarers!" or at least one I can at least settle on.

Other than that, I made a pretty big breakthrough with a part of the story I was having a tough time figuring out. The problem with this part caused quite a bottleneck for other parts of the game because I didn't want to risk working on different parts of the story only to potentially have to change or even get rid of entirely because of this one big part. But with this part figured out, the progress of the story should be going relatively faster.